My previous attempts at loco weathering have involved 5 or 6 blobs of different coloured paints on an old plate, mixed "on the hoof" in different proportions, and dry-brushed on with a stiff brush until I'm happy with it. I had noticed that the basic brew was quite a consistent mixture of just 3 of the colours, with little bits of the others added where required. So to streamline the process, why not clean out an old Humbrol tin, and fill it with some of the basic brew, pre-prepared?

The first engine to try it on was 44560. The first itertion looked ok, except that it was a bit over-glossy.  I had recently finished three if the colours and replaced them with new tins. I have noticed that Humbrol's paint ingredients seem to have changed; it smells different, and separates out more easily. And I have now found that when dry-brushed, it glosses up much more than the old formula.

After several experiments, including adding Carrs weathering powders both in the paint and applied afterwards, I had something worth pausing with, albeit that a second iteration would be needed. The result is seen in the photograph, with 44560 standing beside his stable-mate 44417.  As always, the photograph shows up the shortcomings. The smokebox rust needs toning down, the buffer beam needs tidying up, and 44417, one of my early weathering attempts, needs lots of finishing work.

The other two engines will have to wait until I'm happy with 44560. 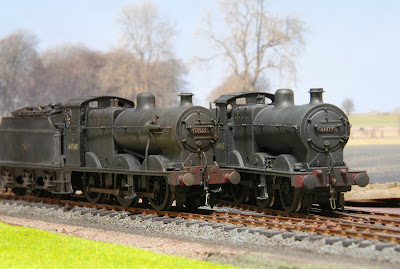 OK, that's better, but they're not finished yet! 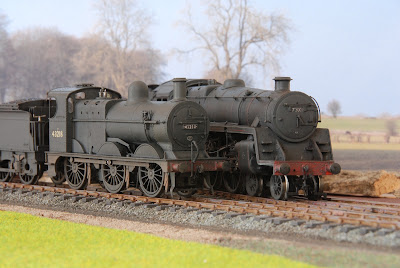