An important decision that all railway modellers must make is which types of coupling to use between vehicles. There can be many factors affecting the decision; cost, time, realism, ease of coupling and uncoupling, .....

For my own set of priorities, I came up with the following guidelines:
The locos and freight stock were therefore largely properly equipped, but the passenger coaches were fitted with a selection of couplings including all variants of the industry-standard "Triang" tension-link couplings (both NEM-fitted and non-NEM), Hornby/Seuthe close couplers, and the recent Bachmann "Vacuum-pipe" fixed close couplings. Interchangeability was achieved with some difficulty by retaining a selection of spares of each type and moving them around the NEM-pocketed coaches as necessary. Others had been tried and rejected.

A thread appeared recently in the "00 Garden Railways" forum entitled "Bachmann Coaches - Close Coupling System". This referred to an article in issue 204 of "Traction" magazine proposing the use of high-strength Neodymium magnets to make the Bachmann "Vacuum-pipe" couplings more readily seperable, and describing the writer's own experiments with the technique. For me, this sounded ideal for the coaches; all the advantages of the Bachmann "pipes", without the need to invert the entire train to uncouple!

I had previously carried out tests and calculations to establish the force required to pull trains up the 1 in 50 gradients on my railway, which showed that the horizontal force required from the locomotive for 12 coaches of average weight 150g up a 1 in 50 gradient is about 46g. This is beyond most RTR 00 steam locos, but for modern RTR diesels it is no problem. Using 2mm dia x 2mm Neodymium magnets from Magnet Expert, I lifted gradually increasing weights, and 55g was the highest that held reliably. This was with a sheet of gummed paper between the magnets to attach one to the weights, while the other was glued to the end of a shunter's pole.

So with a straight pull, 12 coaches up 1 in 50 is feasible. In practice, there will be misalignment, shear forces, and shock loads to contend with, so a stronger magnet would be desirable. But it was close enough that I resolved to carry out further experiments.


I acquired some 3mm dia x 2mm neodymium magnets with a specified 250g in-line parting force and 50g shear parting force. I found some 4mm heatshrink tubing and some Loctite 406 adhesive (for plastic & rubber), and bodged together a pair of magnetic couplers. They were badly made, and the magnets didn't make good face-to-face contact, but I tried them anyway. One went on a loco, the other on a coach, and they were coupled together. The other end of the coach had a cord attached, which ran over a pulley to a hanging weight tray. The weight was increased up to 87g, which is equivalent to pulling 25 150g coaches up a 1 in 50 gradient. I shook the coach and the weights to give a bit of shock loading, and still the magnets held.

I was now more than confident that the technique would work with plenty in reserve, providing I could find a successful method of attaching the magnet to the remainder of the coupling, which would hold when the couplings are repeatedly pulled apart to separate the coaches. The following technique seems to work. I first glue the magnet and pipe together using fast-acting cyanoacrylate adhesive, followed when that is dry with something thicker and more reslient such as Loctite 480. When that has cured, I slide a 5mm length of 3mm ID 3:1 heatshrink sleeve over the joint. Shrink the sleeve, squeeze in a little superglue, and hey presto! It's done! There's a picture below of a pair of coaches coupled up. 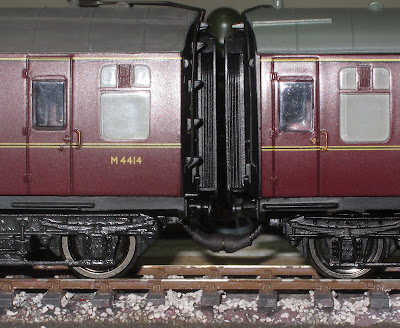 I measured the pull-apart force of a randomly-selected pair of couplings fitted to a loco and a coach. At 180g, it was still holding. That's equivalent to about 56 coaches up a slope of 1 in 50, and is much more than any of my locos could pull, quite apart from any other considerations!
There is one other minor matter to consider when making and using these couplings. To have a pair of magnets attracting each other, one must have the N pole of the magnet outward from the coach end, and the other must have the S pole outward. So we need to make equal numbers of each type of coupling (which will happen automatically if made in joined pairs), and make sure they are fitted in the appropriate places. Those who wants their coaches in a certain order in the train and pointing in a certain direction, may need to swap round some of the couplings to remarshall a train. Maybe not a problem, depending on how you use your coaches.
To resolve this N/S pole issue, I tried a variation on the design using two smaller magnets (2mm dia x 2mm) of opposite polarities side by side. In this way, the couplings at each end of a vehicle are identical, so the vehicles can be coupled in any orientation without changing couplings. I've tested a pair of double-magnet couplings, and they were still holding strongly at a pull-apart force of 190g! That's almost twice what my strongest loco can pull before the wheels start to slip. (Note that 190g is the horizontal force in line with the loco, or the weight it could lift or support using a horizontal cord running over a pulley. It is not the total weight of the train it could pull, which is much greater.) I'll post a full report when I have some pictures.

The advantages of this design (which I have designated Mk.2) over the single-magnet version (Mk.1)are:

I have also devised a simple production method which automatically holds the pairs of magnets in exactly the right orientation for assembly, without the need for any special jigs. Again, a report will follow when I have some pictures.

Further developments? Well, a better design variant is still needed for fitting to locos, and for use on vehicles without an NEM pocket. And it's possible that an even smaller magnet (2mm dia x 1mm) would still give enough strength for our purposes, while still retaining Mk.2 compatibility but requiring less force to pull apart. Watch this space!
Posted by Fungus McBogle at 03:20