Anyone running a 00 garden railway in Britain will very soon discover that keeping it clean can take up a lot of time. And it's not like cleaning the car, or the house, which can always be put off until tomorrow. If your rails ain't clean, the trains won't run.

Something our railway owner might also discover is that running trains regularly helps keep the track clean, especially if assisted by an occasional run with a railhead polishing and vacuum cleaning train. If done once every few days, this seems to be adequate; if left for a week, a manual clean with a track-cleaning rubber will be necessary.

It's not just the rails that need cleaning. The tunnel attracts a wide variety of wildlife, from insects, woodlice, spiders that build webs across the tunnel bore, slugs and snails that derail your train, to mice that eat nuts and acorns and leave the shells on the track. I've even found a large frog jammed in the tunnel.

Today's short running session doubled as a running test of two locos recently acquired second-hand, and needing quite a bit of attention to minor but annoying faults. The first was a Bachmann "Hall", originally supplied with DCC decoder fitted. In its first outdoor trial, it had suddenly lost the changes I had made to CVs (mainly just changing the address away from 3) and reverted to the default (address 3). So I changed its address in the handset, and continued the trial. For its next trick, it waited until I was bringing it to a stop, and when the selected speed was down to 1 or 2, it suddenly shot forward for about a second at high speed. Not good! I opened it up, and the only thing I could see that might have caused this sort of problem was the two capacitors and inductors fitted in the feed to the motor. I thought I'd start with the capacitors as they are easy to snip off, which I did. Today's trial was to see if the symptoms had gone away. I did several runs at different speeds up the 1 in 50 with 6 coaches (all it can manage), and it ran sweetly. It will take a few more hours of trouble-free running before I am confident the fault is fixed, but it looks promising.

The other loco was a Bachmann BR standard 4MT 4-6-0, to which I had fitted a decoder. It ran up and down the 1 in 50 with trains of between 7 and 11 coaches, double heading with a class 4 2-6-0. The only observation was that the tender seemed to be dragging on one side, and at intervals would emit a creaking, groaning noise. On later examination, the cause of this proved to be a large dob of carpet fluff and hair wrapped tightly around one of the tender axles. When I had first received the model, the loco's axles had been similarly encumbered to the extent that it would barely move at all, and I had spent a couple of hours with a pair of tweezers removing it. But I had missed one of the tender axles, an omission I have now rectified, and I hope that there will be no groaning at the next running session.

Attached are a couple of pictures of the double-headed train. If you are a regular follower of these reports, you might notice that I have put the GWR Centenary coaches away in their box, and found a rake in the BR maroon that is more appropriate to most of my locos. 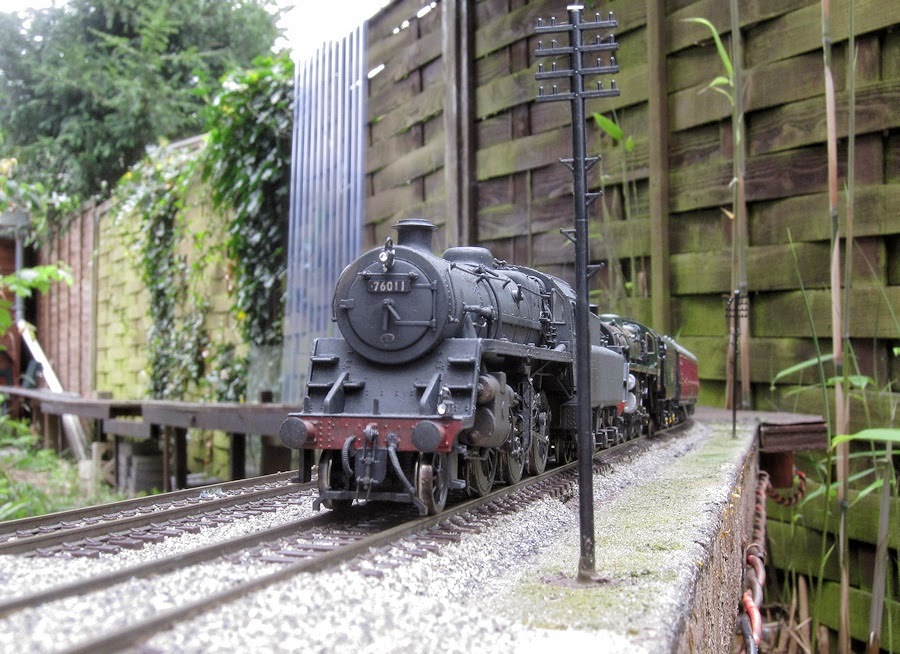