December hasn't been a good month for activity in model-land. Apart from a bit of time spent building a platform and shelter, the time I should have spent on layout-building has mostly gone on dealing with the investigation, repair, and secondary effects of a leaking bathroom down-pipe and a non-working central heating boiler. Oh, and a defective garage door.

So it was quite pleasant this evening to sit down for a couple of hours and do a bit of identity-changing and weathering, as a way of getting back into the mood. Here's one of them; a very old Bachmann pannier tank. It's now 8745, which worked at Yeovil and Bath (S&D) in its latter years. It's had its first pass with the dry-brush, but needs a little more work. The brake tie-rod could also do with some attention; I think it's always been bent like that, so I presume it's a moulding fault. 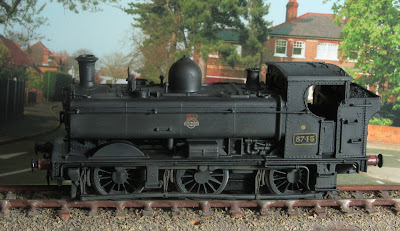 The piece of track on which the engine is standing was made by my father in the early 1950s. I haven't done it any favours by getting in so close.
I also did some weathering on 9F 92220 and 4F 44560, but there's more work to do before they are ready to be photographed.﻿
Posted by Fungus McBogle at 15:28